Rainforests are one of nature’s most fascinating wonders, home to at least 50 percent of all living plant and animal species in the world. Although the rainforests of Australia cover only about 0.3 percent of the land, that includes nearly 3,500 square miles, and they contain around one-third of its mammal and bird species along with about half of all Australian plant species. 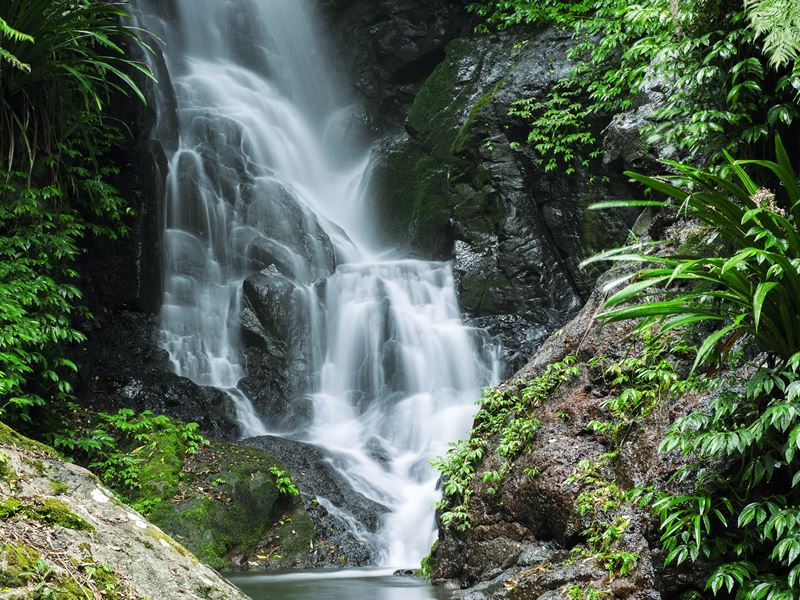 The country’s rainforests have intrigued an increasingly large number of travellers since 2002, after being spotlighted in the reality TV series, ‘I’m a Celebrity…Get Me Out of Here.’ If you’ve ever watched the hit show, where the eventual winner is crowned either King or Queen of the Jungle, you’ve probably wondered what it would be like to be a contestant, and step into the jungle in real life. Former royal reporter Jennie Bond played Bush girl in 2004, raising over a quarter-million pounds for Devon Air Ambulance and impressively finished as the runner up.

While eating bugs and ‘exotic’ animal bits, scrambling around in tanks filled with spiders, cockroaches, snakes and the like, or hilariously being attacked by an ostrich like former Sex Pistol John Lydon may not be your cup of tea, there’s no need to do that in order to enjoy an unforgettable rainforest experience yourself. You’ll find all sorts of fabulous opportunities in Queensland, New South Wales, the Northern Territory and Tasmania.

Queensland is the only place where you can hike through all five climatic types of rainforest: tropical, subtropical, dry, warm temperate and cool temperate. It includes the World Heritage-listed Wet Tropics of Kuranda Rainforest and Daintree, which is the world’s oldest tropical rainforest. Daintree is also one of the planet’s biodiversity hotspots, home to 12 of the 19 ancient flowering plant families on Earth, and averaging 120 different tree species in only one hectare. 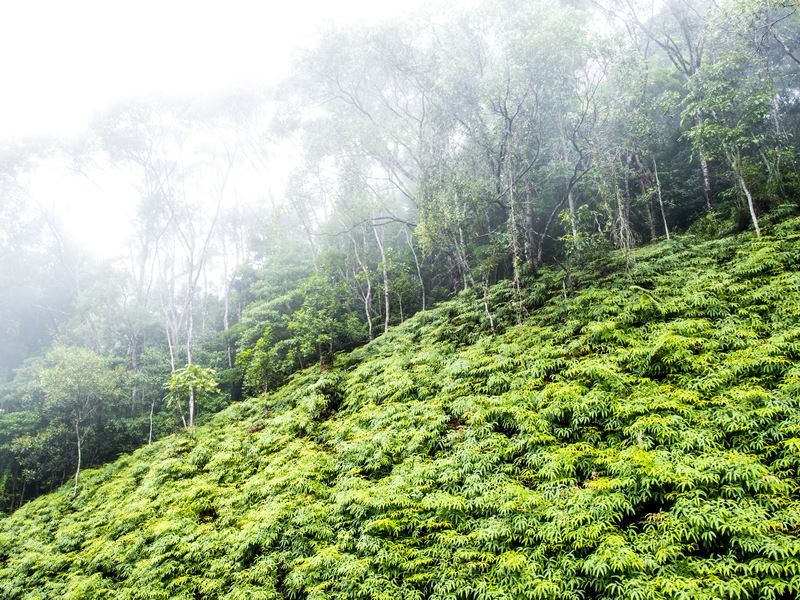 For rainforest exploring, Daintree offers the best of the best. Easily accessed from Port Douglas, Cairns, Cooktown and Cape Tribulation, you’ll want to spend lots of time here with so many things to see and do. For those on a budget, there are even a wide variety of free options, like:

There are lots of other fun attractions too, like cruising the Daintree River searching for elusive saltwater crocodiles, sampling bush tucker with an Aboriginal guide, checking out the strange and fascinating insects at the Daintree Entomological Museum, zipping through the rainforest with Jungle Canopy Surfing, learning about the flying fox population at The Bat House, and heading to the lookout at Mount Alexandra to soak up jaw-dropping coastline views.

You can also take a trek around Mossman Gorge with an Aboriginal guide, while learning about the native medicinal plants and spiritual customs along the away. And, once you’ve experienced all that this spectacular rainforest has to offer, as it’s one of the few that meets the ocean, and even more unique, the Great Barrier Reef, you can go snorkelling or diving.

The Daintree region is known for having one of Australia’s wettest climates. The wet season, December through April, brings heavy, frequent downpours but it’s the best time to visit for seeing the magnificent waterfalls when they’re in full flow. Temperatures are warm, ranging from 27 to 33 degrees Celsius, and humidity often exceeds 80 percent. May through September are the drier, cooler months, with maximum temperatures hovering around 26 and humidity more comfortable.

Kuranda Rainforest is also home to a number of world-renowned attractions, including the chance for close encounters with koala bears, kangaroos, exotic birds, butterflies, reptiles and some of the most venomous snakes in the world. You can take a cruise on a riverboat along the Barron River, visit an impressive gemstone museum and watch traditional Aboriginal dancers perform too. The Skyrail Rainforest Cableway is one of the most popular attractions here, allowing visitors to get a bird’s eye view of the rainforest canopy, and explore some of the hidden treasures that lie within. 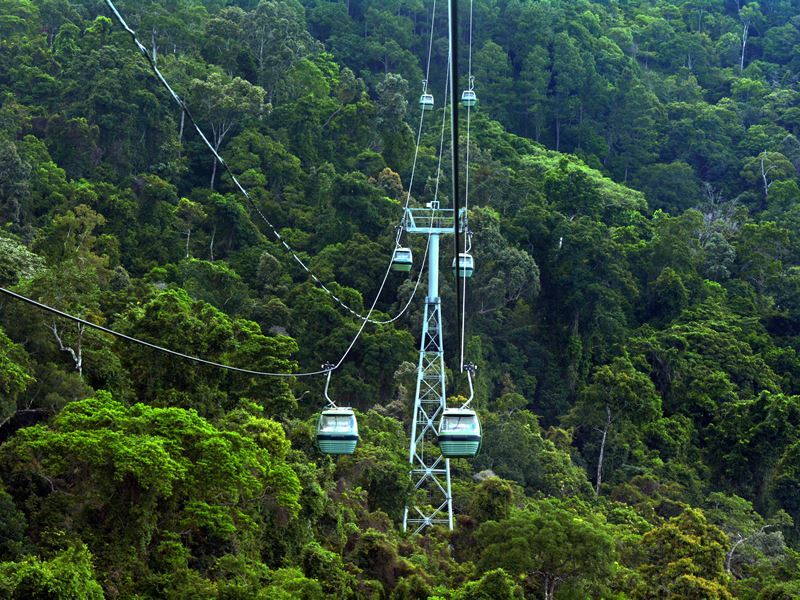 The 7-day, 6-night Great Tropical Self-Drive Tour will allow you to experience many of this region’s highlights.

Where to stay: You’ll find a number of accommodation options in Daintree, including Rose Gums Wilderness Retreat, set among the forest in the Cairns Highlands. It offers an especially unique experience with overnights in spacious timber treehouses. Silky Oaks Lodge is a luxury ecolodge on the Mossman River, surrounded by tropical rainforest, while also offering a treehouse stay and gourmet dining.

Northern New South Wales is home to Australia’s Gondwana Rainforests, a World Heritage Area which also spills into Queensland, and comprises eight distinct regional groups scattered between Newcastle and Brisbane. This is the jungle where the ‘I’m a Celeb’ stars have been toughing it out, so if you’re hoping to take a walk in their shoes, you won’t want to miss it. Easily accessed from Byron Bay, it includes the world’s largest subtropical rainforest as well as warm temperate rainforest and most of the world’s Antarctic beech cool temperate rainforest. This extraordinary region is still home to ancient and primitive animals and plants from which life on Earth evolved. 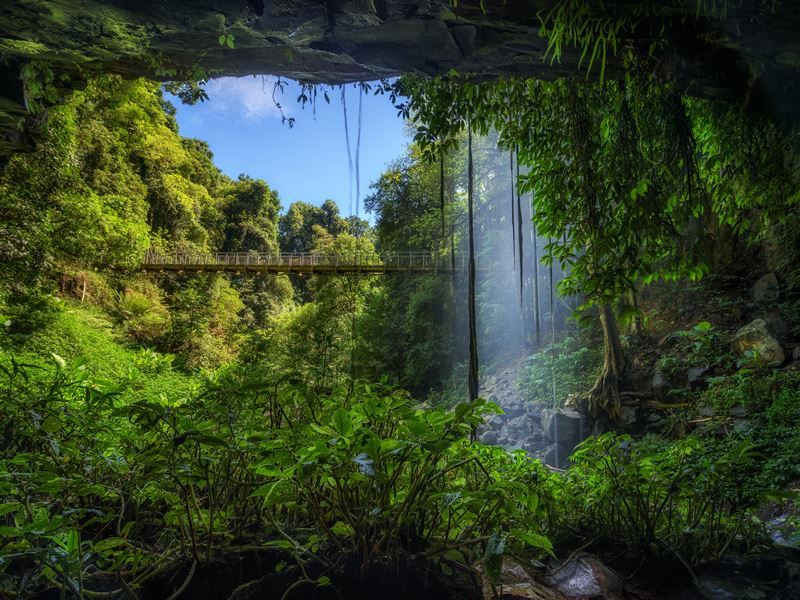 Just a few of the things you can do here include listening for the call of the rare Albert’s lyrebird, bushwalking through the rainforest in Border Ranges, Mount Warning or Nightcap national parks, which flank the ancient volcano of Mount Warning Wollumbin. Trek among the giant ferns under the moss-covered Antarctic beech trees – in Springbrook National Park, some of those beech trees are 3,000 years old. The park hosts brilliantly lit up caves, thanks to the light of the glowworms as well. Before or after exploring them, picnic above Purlingbrook Falls, and then walk through the dry eucalyptus forest to the gorge and peak out from behind the 300-foot waterfall.

Mount Barney towers more than 4,400 feet and offers ideal terrain for hikers who want a challenge. At the peak, you’ll be rewarded with sweeping vistas, from Brisbane in the north to the vast Mount Warning Valley, an erosion caldera of an extinct volcano in the south.

Where to stay: O’Reilly’s Rainforest Retreat can be found in Lemington National Park. It’s not only an ideal base for exploring the rainforest, but it offers activities like the zip-line tour called the “flying fox.”

The Northern Territory is home to Heritage-listed Kakadu National Park, which features pockets of monsoon vine rainforest. Contrast the wildlife in this area to the surrounding dry lowland woodland savannah, and take advantage of the shade by bringing a picnic lunch. You can explore its highlights by hiking to the over 820-foot-high Jim Jim Falls, following the Gubarra Pools walk, or taking the walk through the savannah woodlands to the edge of a billabong. The park also offers the chance to cruise while watching for all sorts of birds, barramundi and crocodiles as well as helicopter flights that soar over its rugged escarpments and waterfalls.

Keep in mind that areas of the park are often inaccessible during the monsoon season due to flooding, so visiting during the dry season, particularly between mid-June and mid-August, is your best bet, with little rain and daytime temperatures hovering around 30 degrees. The concentration of birdlife increases even more as the dry season progresses, with the mid-August to mid-October hot and dry Gurrung season considered prime time for bird watching. 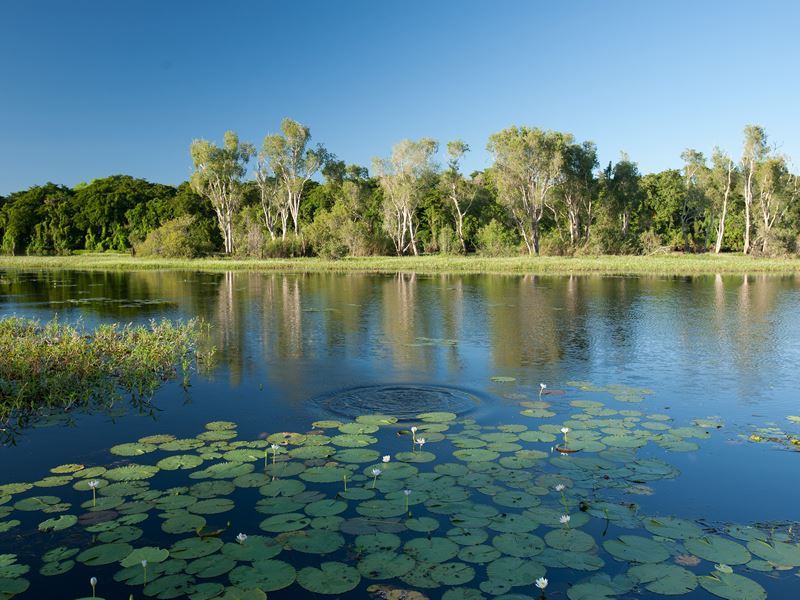 Tasmanian rainforest is classified as cool temperate rainforest, representing the most floristically complex and best developed form of this type in the country. It can be found in patches on the east coast of Tasmania, as well as the north-east, the south-west and in Savage River National Park. Most of these largest swatches of rainforest are protected as part of Tasmania’s World Heritage-listed Wilderness. While they’re cool and dark, they’re home to a wide range of plant and animal life, including species that can’t be found anywhere else on the planet.

The Tarkine Rainforest is a rarely visited, pristine ancient forest that’s often referred to as the “forgotten wilderness.” It boasts a stunning wonderland with giant tree ferns, hidden waterfalls, wild rivers, caves, sand dunes and rare birds, including the threated orange-bellied parrot and the nearly-extinct Tasmanian devil. Unlike what many assume, the devil isn’t just a cartoon, but the world’s biggest carnivorous marsupial. To explore it, you can head out onto the trails, or the waterways, on your own, or with a guided tour. 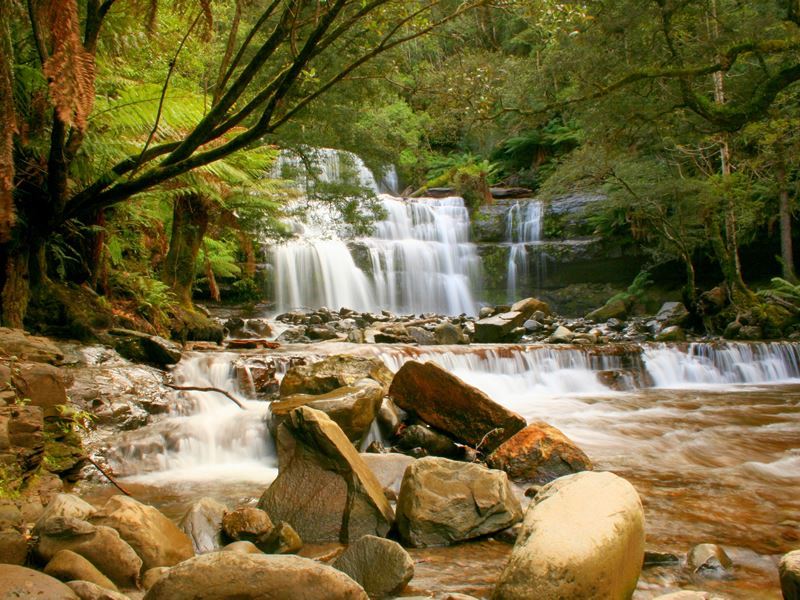 Some of the popular walks through the island’s rainforest include the Overland Track which winds through the ancient forests in Cradle Mountain-Lake St Clair National Park. You can also check out the moss-draped Gondwanan bugs on Southwest National Park’s Creepy Crawly Nature Trail and keep an eye out for the rare huon pines while walking the Franklin River Nature Trail in Wild Rivers National Park. More outstanding rainforest treks can be found at Liffey Falls, along the northern edge of the Tasmania Wilderness World Heritage Area.

Where to stay: Peppers Cradle Mountain Lodge makes a great base for exploring Cradle Mountain-Lake St Clair National Park and experiencing nature at its finest, located in the heart of the pristine Tasmanian wilderness. 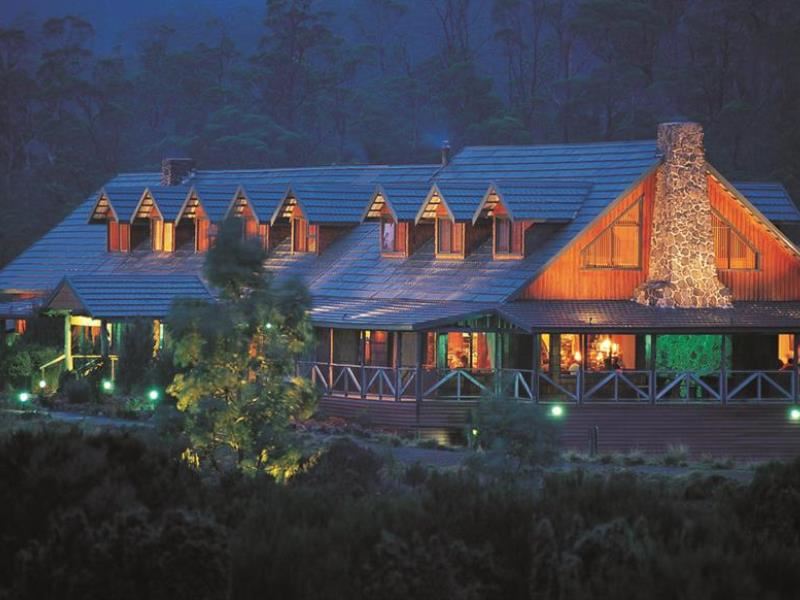